This is the page where I give some brief information about ant species I keep myself, or have kept over the years. I will add pictures of the ants as, and when, I have any to place here. I only keep journals about my ants on Ant Hill World forum, so this will be more of a hobbyist page rather than an in-depth diary on any particular ant species.

The ants I currently keep will be listed here, with photos if I can get any; but I do not profess to being an ant expert on species which are not native to Britain, although I will pass on any interesting information I may come across during my own personal studies of all ant species kept in my home.

I am currently keeping a colony of this Asian ant species which is a very large black ant with red heads. The colony consists of 1 queen and 17 workers, and in their year the queen has laid a large clutch of eggs, as you can see in the photo taken by my wife. 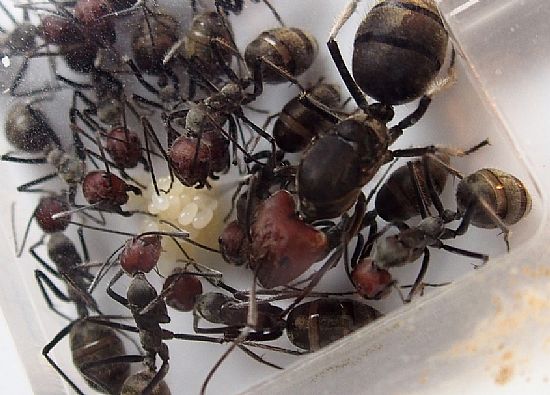 On the 28th of April 2010, I received a nice colony of this species. It consists of 9 queens and about 70 workers, plus a fair number of eggs and larvae. having settled very quickly into their new home (please see the latest video for this) the colony sent out workers to forage for food.

Note the length of the epinotal spines (outlined in white with a yellow arrow pointing to the spine) which are longer than those of their very close cousins, Myrmica rubra which have shorter spines. 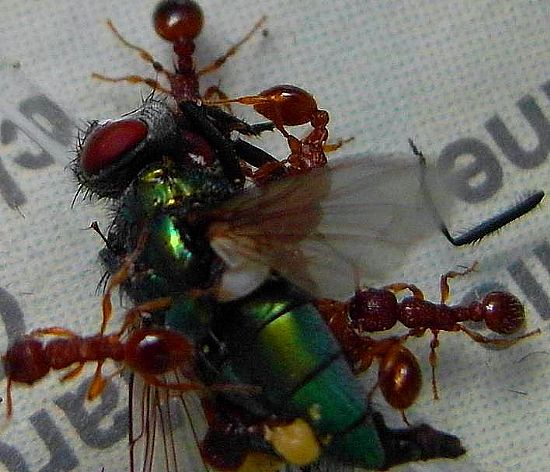 This colony arrived at my home on Thursday 22nd April, 2010. It consists of 3 nice healthy queens, around 25 workers and some newly laid eggs. These are one of the very first ant species (along with Myrmica ruginodis) that I kept back in the mid 1960's when I was at school in Cheshire, as my mates and I often went ant hunting in the local hills (The Hollins) where dozens of nests could be found under flat stones, especially on slopes that had a south facing sunny aspect. 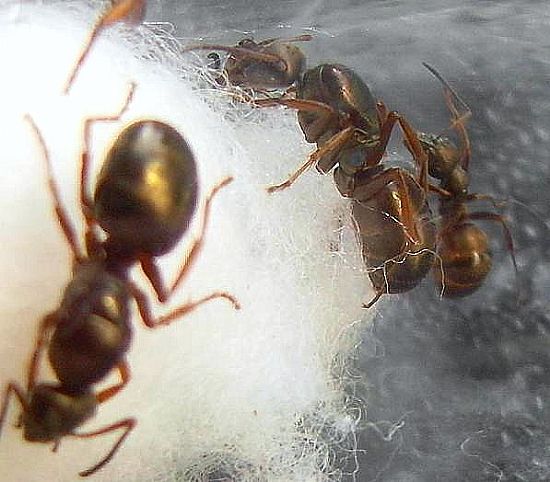 Here are 2 of the 3 queens from this nice colony, sent to me from an ant hunter in Scotland who had a successful ant hunting expedition.

A very new addition to my ants, this colony arrived on the 16th of March 2010 and has 1 queen, 7 soldiers and lots of workers and brood, making a total of maybe 75 to 80 ants. A two minute video of this colony is available in HD for viewing on my Video gallery page. Plus you can also see 3 videos which are a sequence of these ants taking a spider into their nest.

This colony is set for a massive population explosion, as the brood chamber is very full.

For such tiny ants, they certainly love to forage for food. here several workers take down a green-bottle fly.

This is a lovely ant specie from Eastern Europe, very similar in appearance to the native wood ants of Britain such as Formica rufa, except that F. lusatica does not have the large major workers found in most wood ant species. I bought this colony in June 2008 from Antsectopia. Although my own colony only has 1 queen, the species is polygynous and may have several queens per colony. Despite only having just 1 queen, she has been very prolific and laid many eggs, so what began as 1 queen and about 9 workers has now grown into a colony of around 70 ants.

Video of this colony can be found on the Ant Video page. The photo below shows the lovely colouration of this species, though these ants are not from my own colony. The photo is of Formica lusatica worker ants foraging in the wild.

Here are a few of the latest photos of my colony taken on April 1st 2010, showing just how well a single queen can produce brood. As you can see, the colony has massed plenty of eggs and larvae, none of which were in the nest just 3 weeks prior to these photos. 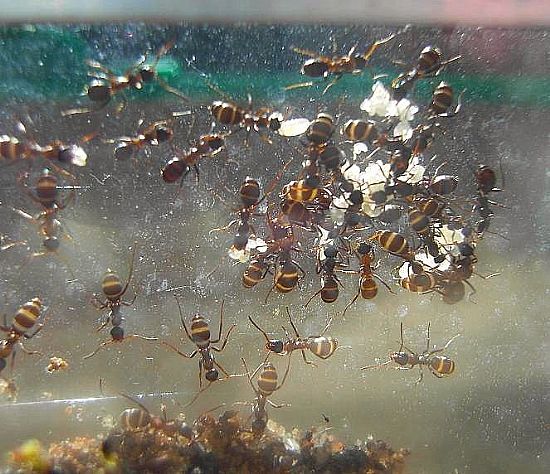 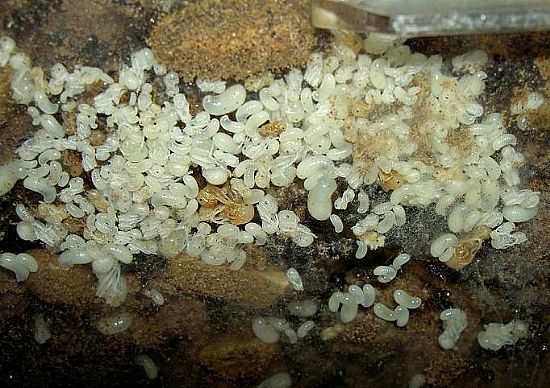 Giving all this extra protein in the form of dead insects and spiders has helped boost my Messor barbarus colony, so that now they have many large larvae and pupae. Below are some photos taken by my wife, showing the brood chambers. Getting these pics was no easy task, as it involved holding up one end of the tank with one hand, while holding the camera with the other; and trying to avoid camera shake while taking these photos!

Note the newly emerged callow ants in this photo. 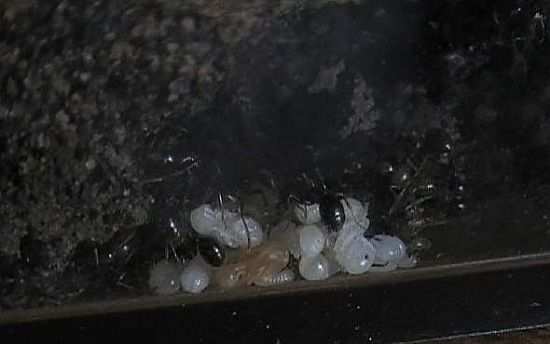 Sunshine brings out the instinct to warm the brood. 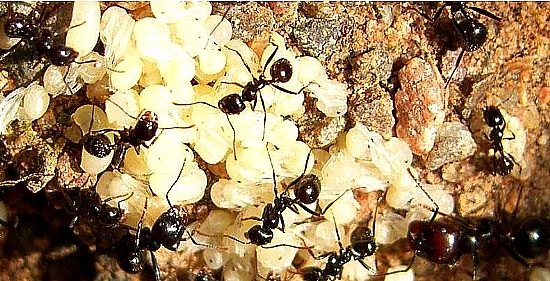 Both the above and below photos were taken by my wife on April 17th, 2010. 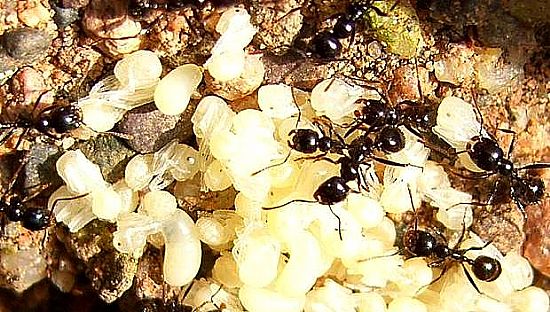 A Spot of Weeding.

The photo below was taken by my wife. It shows a Messor barbarus worker doing a spot of weeding, as she tries to remove a germinated seedling from the nest entrance. This ant belongs to my largest colony. 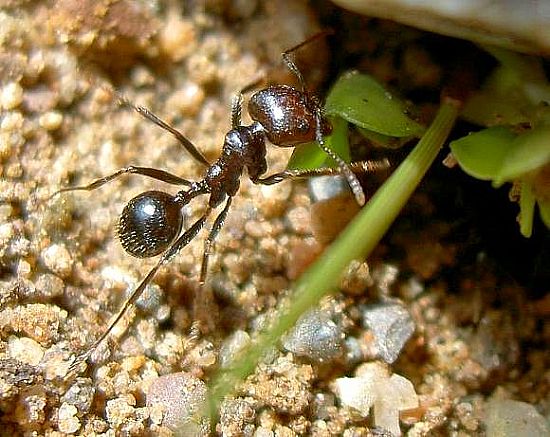 When see these ants look black in normal light, but when observed with strong sunlight shining through their bodies they appear as a lovely reddish brown rather like the colour of chestnuts.